People who use the CBS-All Access app to access content available to CBS customers with a pay-TV provider are going to have to make an adjustment. The CBS All-Access app will become the new Paramount+ app on March 4th.

CBS is about to become like the other broadcast networks as far as the streaming world. There will be a CBS app meant to deliver CBS content to users who access the network via a pay-tv provider. The app will be meant to watch CBS shows on-demand as well as accessing a live feed of CBS programming via the user’s local CBS station. The move comes as the company looks to sharpen and define the differences between stand-alone services and premium streaming services.

The app will launch on March 4th which not coincidentally is also the launch date for Paramount+, the new rebranded service that will replace CBS All-Access. Paramount+ will address the fact that since the reunification of Viacom and CBS to form ViacomCBS the CBS All-Access app no longer made sense as a brand.

CBS All-Access started as an app to specifically highlight CBS programming, streaming originals, and live TV access to CBS affiliates. But after the merger, the app then became a funnel to much more content that was not part of the original CBS umbrella. Paramount recently highlighted a number of new projects that will be part of the new app with originals from across their brands even including early access to first-run movies such as Top Gun Maverick and Mission Impossible 7.

The CBS App will function much more like apps for NBC, FOX and ABC. Each of them offers some content for free but expanded content and capabilities for those who can sign in via a paid service be it a cable provider or even a streaming provider like Fubo TV. This kind of setup will help differentiate the content experience from Paramount+ by giving each branding its own neighborhood.

At the moment CBS All-Access is both a portal to its 2 tier premium streaming service as well as a portal to users who sign in with a TV provider. But users are getting a message to be ready to download the new app when it is available. Those with the CBS All-Access app will be tranitioned to the Paramount+ app via an update. The sepperate apps should clear that up if the company sticks to the plan. 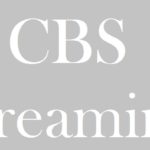