Apple finally updated its Apple TV streaming box with the additions many observers have been expecting/hoping for. Just in time for 8K to be considered cutting edge, Apple will introduce a new 4k HDR2-capable device that includes a redesigned remote control, which will be the third new concept on the device remote. The new remote addresses issues with controllability by providing touch-sensitive controls without using the entire top of the remote as a mousepad. Another feature that should prove popular with families is profiles so that a given user’s favorites and configurations can be available at a click.

Apple promises the new A12 Bionic chip will outperform any on the market while delivering crisp color and Dolby ATMOS audio as well as Dolby VISION. The sound and video should make videophiles happy. Dolby ATMOS is a highly requested feature for home theater enthusiasts. While we are not sure that your eyes or TV will be able to perceive HDR2, the designation puts Apple at the top of the streaming media player food chain. But even if you can’t be sure you can see the difference Apple will help you see the picture as well as is at all possible by letting users set and calibrate their screen using an iPhone.

The new device will allow users to hook up two sets of Apple’s AirPods which will provide the adults in the family with the flexibility to watch as loud as they want later at night. That is a nice new way to build further into the Apple ecosystem. AirPods have grown in popularity due to their high-quality sound performance and intuitive usability.

Should you buy it?

Overall the updated device delivers some much-requested facelifts but does not change much about the product overall unless users have invested in higher quality home theater equipment. If this is you, it may be worth jumping on the new product. It will earn you more credits for Apple TV+ and give you more pop. If you already have the most recent model and rely on built-in speakers, and or have a TV that is already struggling to provide 4k performance, then the upgrade will not be worth the nearly $200.00 price. 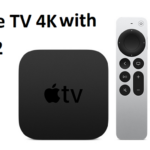