Amazon rolled out Electric dreams this week. The original production consists of 10 stories by the visionary science fiction writer Phillip K Dick. Much like1980s era show The Ray Bradbury Theater, each story is its own. Amazon hopes to strike gold again with the author’s work as they already have with Alternative History series The Man In The High Castle.

Each story lasts between 45 and 58minutes. Fans should not have any trouble recognizing the cast as it features a who’s who of Hollywood A-list actors from the big and small screen. 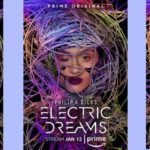