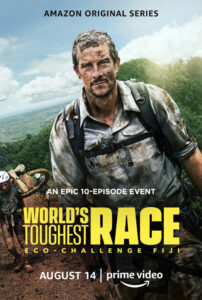 Amazon will be releasing 10 episodes of the worlds toughest race starting August 14th.

Prime Video on August 14th 2020 in more than 200 countries and territories worldwide.

At its core, World’s Toughest Race: Eco-Challenge Fiji is about perseverance. People from all walks of life and every corner of the globe join together to overcome the most incredible obstacles. The challenges lie both within the course itself, and competitors’ equally daunting personal struggles, which are only magnified by the demands of the expedition. Viewers worldwide will see the limits of human physical and mental endurance tested like never before.

Showrunner and Executive Producer, Lisa Hennessy, worked alongside Burnett on all eight prior Eco-Challenge races from 1995 through 2002. The program stands as the pioneer for unscripted competition series, and 25 years later World’s Toughest Race: Eco-Challenge Fiji brings about an unprecedented scale and global design to the format.  The series, produced by MGM Television in association with Amazon Studios, comes from an award-winning team in television including host and executive producer Bear Grylls (Man vs Wild, Running Wild), showrunner and executive producer Lisa Hennessy (Eco-Challenge, The Biggest Loser), and executive producers Mark Burnett (Survivor, The Voice), Eric Van Wagenen (Survivor, The Amazing Race), Barry Poznick for MGM Studios, and Delbert Shoopman, Grylls’ producing partner.

5G Coming To A Home Near You And Its Portable